The right to protest – the theory

Under the Human Rights Act 1998, it is unlawful for a ‘public authority’, including the police and the courts, to act in a way which is ‘incompatible’ with the rights of the individual contained in the European Convention of Human Rights (ECHR).

The ECHR contains a list of rights (freedoms) to which everyone is entitled.

Some of these rights are ‘absolute’, meaning they can never be lawfully breached, whilst others are ‘qualified’, which means they can be restricted under certain circumstances.

Protesting primarily involves the exercise of the rights set out in Articles 10 and 11 of the ECHR, both of which are qualified rights.

Article 10 enshrines the principle that ‘everyone has the right to freedom of expression’, including the freedom to hold opinions and exchange information and ideas ‘without interference’.

Article 11 protects the right of people to gather: ‘everyone has the right to freedom of association with others …’

However, laws may legitimately restrict these rights – if it is considered necessary to do so for one of a number of stated purposes, including:

The ECHR is broad enough to encompass many different interpretations of what these rights mean in practice.

Protest in the UK

The existing law, which in large part dates back to 1986, grants police extensive powers to regulate protest.

Organisers of marches who do not give prior notice to police are liable to prosecution.

The law allows the police to impose ‘conditions’ on both ‘public processions’ (marches) and ‘public assemblies’ and it is an offence to knowingly fail to comply.

The police may impose any conditions on marches the senior officer considers ‘necessary’ to prevent ‘serious disorder, damage, disruption or intimidation’.

However, so far as static gatherings are concerned, conditions may only be imposed as to: the place where the assembly is to take place, the duration and the number of participants.

The Police, Crime, Sentencing and Court Bill currently before Parliament both extends these powers and increases the penalties for failure to comply.

Where previously the maximum penalty for many of these offences was imprisonment of 3 months, under the proposed law that would increase to 51 weeks.

Police would be permitted to impose any conditions deemed necessary, whether dealing with a march or a static assembly.

Where currently conditions can only be imposed to prevent ‘serious disorder, damage, disruption or intimidation’, under the new law conditions could be imposed where the noise of a march may either:

‘Relevant impact’ includes noise which may cause people in the vicinity ‘to suffer serious unease, alarm or distress.’

The new law also removes the requirement to prove a protester ‘knowingly’ failed to comply with conditions.  It will be sufficient to show the person “ought to have known” of the conditions even if, in fact, they did not.

The new law extends the geographical area around Parliament in which various activities are subject to prohibition, such as “anything which makes the passage of a vehicle more difficult”.

The new law also creates a new statutory offence of public nuisance.  This prohibits ‘any conduct which endangers the life, health, property or comfort of a section of the public’ or ‘that obstructs them in the exercise of rights belonging to the public.’

The new law would allow police to restrict the freedom of the public to protest in circumstances which include where the protest may cause noise of a level that may cause an onlooker ‘serious distress’.  The law is sufficiently widely drafted as to be capable, at least in theory, of allowing restrictions to be imposed on any protest – other than perhaps a silent protest in a remote area!

This has led some to question whether the rights to freedom of expression and assembly will, to any meaningful degree, survive the proposed changes.

Whether or not the new bill passes into law, the police and the courts must still comply with the public’s right to protest.  Take this Bust Card with you.

It is a good idea to have essential numbers written down on a piece of paper (there is space for this on the reverse of this card) and even on your arms – as the police will normally seize any mobile telephone if you are arrested.

Be sure to take plenty of water and be prepared to be out for longer than you might expect.

The police can only arrest you if they have reasonable grounds both to suspect you of committing an offence and for believing it is necessary to arrest you.

The arresting officer should identify themselves by either a name or a number.

Other than at the police station, police are only allowed to search outer clothing.

If you are suspected of anti-social behaviour the police can require you to provide your name and address.

Other than this, there is no general obligation to provide these details unless and until you appear in court.

You should not answer any questions about any alleged offence unless you have received appropriate legal advice.

You are entitled to free and independent legal advice whilst at the police station. This is subject to limited exceptions unlikely to apply to protesters.

You must be permitted to speak to a solicitor on the telephone in the first instance. 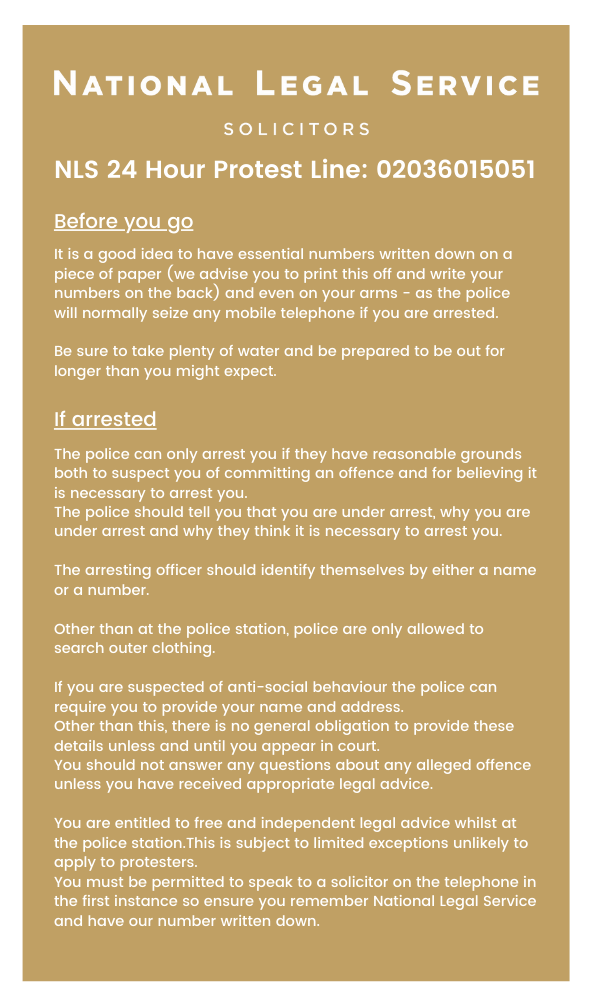